We started about 8:10.  I had on my wetsuit even though it was old and full of holes.  I was a little worried it would bog me down, but would rather have it.  This was a long distance I wanted the extra warmth and buoyancy that it provides.  I did not have the same anxiety leaving the safety of the cove as I had with the touch-and-go attempt last year.  I was a little more confident this year in spite being a longer swim.  The water did start to get choppy though and remained choppy the entire way across.

It usually takes me 50 minutes to an hour to cross Alcatraz to Aquatic Park, however, I’m told the currents tend to push out towards the island so I was thinking it would take less time to get out to the island.  This was my first time swimming to the island.  This did turn out to be the case.   In 40 minutes I was even with Alcatraz, however I was a little wide of it.  The flood waters had pushed me too far east and now I had to turn into those flood waters to get to the island.  That was about a 15 minute battle, so by the time I started around the back side of the island I was 55 minutes into the swim.  I stopped at a kayak, got some water and used the restroom (the wide open bay).

Swimming around the back was a delight!  I kept my breathing to the left so I could watch the island pass.  It needs paint.  I thought of my friend that is a painter.  It would keep him busy for a while to paint all those crumbling buildings on Alcatraz.

It was another 15 minutes around the back of the island.  Slowly I could see more of the Golden Gate Bridge as I rounded the North West.  Then I cut across the front of the island as per the instructions from the test swim the day before.  The way I read the tide charts it looked like there was a flood until about 11:00, but in the test swim the day before the ebb kicked in early.  They were expecting the same today and instructed us to sight towards the east and actually swim with the flood.  I was nervous about this, but followed the instructions.

It took a total of 35 minutes to circle the island before I started heading towards the city.  The water was choppy, but I felt strong.  In fact I was swimming hard.  I could not see the island over either of my shoulders which I took as a good sign.  It was behind me where it should be, hopefully getting further away.

Now I don’t know how much my mind affects me physically, but after 20 minutes of so I started to think, “I’m not going to be able to keep up this pace the entire way.”  It was shortly there after that I started to feel the fatigue.  I stopped to look.  I was about half way.  I seemed to be on course, a little to the East which was where I should be assuming the ebb would kick in.  I continued.

Once the fatigue set in it hit me fast and hard.  In another 15 minutes I felt my arm strength was almost gone.  I could tell that the ebb had kicked in and I was getting carried closer back to the opening at Aquatic Park.  If I got carried too far there was no way, with my lack of strength, that I was going to be able to fight the ebb to get back to the opening.  My swim would be over.

Sure enough the ebb did carry me a little passed the opening, but not by very much and I was able to make it.  That was it!  The official distance to get credit for a crossing is the opening of Aquatic Park.  I had made the two crossings, number 23 and 24.  I could have quit right then and got the credit.  The finish line, however, was another quarter of a mile away at the beach.  I put my head back in the water and kept swimming.

I do not know how I was swimming.  I was convinced my arms were of no use at that point.  I was still pulling hard from my hips, through my torso, but when the pull got to my arms there was nothing.  Still I was moving forward, past the break wall, passed the Balclutha ship, passed the tug boat and up to the buoy line.  It was the toughest ¼ mile swim of my life.  There was a kayaker that was with me for the passed ½ hour.  I could hear him shouting to the swimmers that were swimming the buoy line to let me though.  I was grateful for this.  I had little left to pay attention, stop and start again to let them go.  Then it was on towards the beach.  I could hear the cheering and cowbells from the spectators on shore.  I kept my head down and plowed forward.  Soon I could see the sand at the bottom coming up closer to my face.  Then I had contact with my hand, one, two, three times I touched the sand. Up!  The cheers went up too.

I was not feeling good.  In spite the incredible swim, I felt a sense of defeat, everyone was on shore already.  If I was not the last, I was close to it.  I also felt a sense of defeat because I had reached my limit physically.  There was no way for people to know if so when one of the kayakers and a friend, said to me, “What happened did you stop for breakfast,” referring to my slow time (of 2 hours 30 minutes), I understood his humor even though it stung quite a bit.  I don’t like that I’m such a slow swimmer, even though the distance that I did, 4 miles, was quite an achievement.  I’m sure the sense of defeat will pass in a few hours.

Below is my GPS trail of the swim.  You can see the path and the points that I mention in the story above. 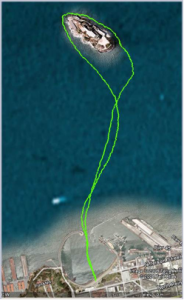