The furthest and longest I have ever swum before is 2.4 miles in one hour twenty-five minutes back in July of 2005. This was during the Catfish Open Water Swim in Steven’s Creek Reservoir. In the warm fresh water I swam without my wetsuit.

I had no idea what to expect for the Bridge to Bridge, a six mile swim from the Golden Gate Bridge to the Bay Bridge. The distance is deceptive as the swim is with a current traveling twice as fast as I. I would defiantly bring my wetsuit for the cold waters of the Bay. While I have been doing many bay swims without it, because I did not know what to expect, I figured I’d better wear it.

There are two advantages of a wetsuit. First the obvious, they keep us warmer. Second they create buoyancy that saves energy and actually makes us faster. Warmer and faster for an unknown swim I’m in.

I started getting a little nervous about 5:00 PM the night before. I realized I had no idea where in the vast bay I should be aiming. I listened to the coaches and swim organizers, “stay away from here, try to swim here,” but that just made it worse. I was actually going to have to think and have a strategy.

I went for a run that evening and ran up onto the Golden Gate Bridge to get a bridge-eye view of the bay. Vast it is compared to a tiny swimmer. I could see the turn along the San Francisco water line where I would have to turn towards the Bay Bridge. “I think I’ll be fine,” I said to myself.

I only got about four hours of sleep that night. That’s right, I had to go out dancing and was not in until midnight, in bed by 12:30 for a 4:30 wakeup.

At the bridge we all jumped in the water. When the last swimmer was in, the starting horn was sounded and off we went, 38 swimmers with the support of 20 kayakers and four power boats, including the two that we just all jumped off.

As I began to swim, I kept the visual of the Golden Gate Bridge over my shoulder with each breath I took. It was growing in distance fast as the current carried me faster than would just my swim stroke. “This may be quicker than I thought.”

The water was a little rough by the bridge but quickly flattened out. Now I become a sightseer as I pass by all the landmarks. The first is the Palace of Fine Arts. I knew I was supposed to stay out in the middle of the bay until I reached the Palace of Fine Arts and then cut in towards the shore. The Palace was slow to come. I could see it up there, but it seemed forever before I reached it, and then forever before I passed it.

The next landmark is Fort Mason. I turned in towards Fort Mason aiming directly at it. My plan was to get closer to the shore as recommended by the race directors.

As I drew closer to Fort Mason I could see Alcatraz over to my left. I seemed too close to Alcatraz, but I had to remember from my many Alcatraz crossings that distance can be deceptive. I looked ahead and could see the turn by pier 39. I started to aim towards the turn instead of Fort Mason. I was supposed to hit that turn close and then head on to the Bay Bridge close to the waterline. Our destination was the Alpha Tower of the bridge, the tower closest to the city.

I could see the Alpha Tower peeking up over the city as I drew near the turn. I thought if I just aimed towards the tower the current would carry me past the turn and then I’d be home free.

I looked at my watch as I passed Aquatic Park, the ½ way mark. One hour, I had been swimming for one hour. I stopped and pulled the energy gel out of the sleeve of my wetsuit and ate it. I needed water. The kayakers were supposed to have water for us, but I could not see one anywhere. In fact I did not see any other swimmers either. Aside from one of the power boats I could see in the distance towards Alcatraz, most likely with some other swimmers, I seemed all alone out there. I swam on. The energy gel without water would have to do.

Now I’m not too sure what happened next. I kept my line towards the Alpha Tower. Like the Palace of Fine Arts and Fort Mason, it seemed to take forever to get to that turn at Pier 39. It was comforting when I could no longer see Alcatraz to my left. However when I cleared that turn and could see the entire span of the Bay Bridge I could see clearly that I was in line with the Beta Tower. I was too far out in the bay. The warnings of current carrying me to Treasure Island haunted my mind. I kept my aim to the Alpha Tower.

I slowly made my way passed Coit Tower and could see the Transamerica Building. I was still too far out. I decided I should turn more perpendicular to the shore, almost 45 degrees, and let the current carry me the distance to the bridge while my efforts would do to bringing me in closer to the shore. I kept swimming. My arms were getting tired and I was longing to reach that tower where the boats would be waiting for me. I noticed I was only breathing to my left side like I used to when I first started swimming. I had practiced an got used to breathing from side to side for so long that it seemed natural, but here I was digressing to my old swimming habits. I must be very fatigued. I looked at my watch. Two hours! This was taking me a little longer than I thought after I made that turn.

A kayaker pulled up next to me. “Too late,” I thought, “I’m close enough I do not want to stop for water.” I knew I was probably very dehydrated and the salt water in my mouth for the passed two hours was drying up my tongue. He shouted something to me and pointed. I had ear plugs in and could not hear what he was saying. I thought he said something like a boat would come pick me up. I didn’t want to be pulled out of the water. I knew I could make it to the tower. “I can’t hear you,” I shouted. “Just keep swimming,” he said and pointed again. I looked up and could see the boats. “Oh is that them?” I questioned. “Yes, good job, you are almost there.

I turned almost completely perpendicular to the city and passed the Alpha Tower. The boats were tucked in underneath the bridge a little bit passed it. I felt good and I had a good rhythm in spite being fatigued and breathing only to one side. I was still pulling strong but fatigued. I began pulling even stronger knowing the boats were just there.

I could hear the cheering and I turned in towards the boats. Lots of cheering meant I was one of the last ones. The other swimmers were all there waiting. I eyed the large orange buoy that was the finish line. I pointed myself towards it allowing the distance between it and me shrink with each pull until I was able to touch it. Cheers went up and I yelled my number up to the official boat so they could mark my time. I looked at my watch, two hours twenty minutes. While it was longer than I’d hope I felt some pride that I was able to swim almost an hour longer than my previous long swim.

I climbed onto the boat with all the awaiting swimmers. “Sorry to keep everyone waiting,” I joked. “No, there are still a couple more behind you,” someone said. It’s true I was one of the last ones. My heart sank a little.

What a swim! Never mind the deceptive distance with the strong currents. I swam for two hours twenty minutes! Never mind that I was one of the last on the boat. I was one of the last of an already elite group. We were all first place finishers just for participating. Even the one that got pulled out early for being too cold was a winner if he chose to look at it that way. I sure was.

The following day I emailed one of the coaches and sent my GPS trail for tips on what I could have done better. She said I did it perfect and then confessed that only 6 of the swimmers actually touched the buoy. Most of the swimmers were so far off course that the race director had to make the decision mid-race to change the finish line to anywhere under the bridge instead of the orange buoy. That was what the kayaker was trying to tell me, “Just get to under the bridge and a boat will come to get you.” I’m glad I didn’t hear. I was one of the few that actually navigated well enough to actually finish the swim the way it was meant to be.

The coach passed on this message from Pedro, the race director and my coach over the passed four years, “Pedro is so proud of you, he said you should be thinking about the EC [English Channel], that you have a future in long (LONG) distance swimming.”

What’s next? Well, not the English Channel. I admit it has been on the back of my mind as a potential long term goal, but that would be a long ways off if I ever. No, the next swim is the Swim Around the Rock, starting on the shores of San Francisco at Aquatic Park, swimming out to Alcatraz, around it and back. It’s ½ the distance that I just swam, but without the helpful currents. In fact the currents become a challenge as they are cross currents that can push me off course. I have been afraid of the Swim Around the Rock, but now that I know that I can swim for two hours and twenty minutes, I feel a little more confident. Sign me up! 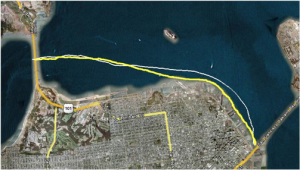