I failed the last time I did the Kirby Cove swim in 2012.  By the time I got to the opening of Aquatic Park I was still a quarter of a mile out.  I had to be picked up and repositioned.  In retrospect I wished I had just swum straight across and let the current do the work to carry me east.  That was my intention this year.   I’d rather end up across the bay early and swim parallel to the shore with the current than end up carried too far east and have to be repositioned again.

But ultimately it is up to the pilots.  We have to listen to the pilots even if we disagree.  It’s an issue of the safety of the entire swim and all the other swimmers.    We can’t get too far spread out, or the boat coverage is not as good.  They may also be aware of other hazard we cannot see with our fish-eyed view.

During the briefing we were instructed to swim directly south until we reached mid span of the bridge.  We wanted to go under the bridge south of mid span.  This is important because at that point the current splits, the southern current heads straight into the Bay.  The north current will start to head north to fill Richardson Bay, flow through the Raccoon Straight and head on up to San Pablo Bay.  If a swimmer is stuck in that northern current it becomes a fight to get across.

After we cross under the bridge, we were instructed to swim east for a while.  The current is stronger the further out we are, but we don’t want to be out too far to make it too difficult to get to the other side before the current carries us to the opening of Aquatic Park.  That is the balancing act with this swim … finding the sweet spot, far out enough to catch the current, but not too far out we can’t get in on time.

This briefing was contrary to my plan, but I had to let that go and trust the pilots and swim organizers.

We had the coverage of one kayak for every two swimmers.  We were to pod up with someone our speed.  I’m pretty slow and had a hard time finding another slow swimmer.  I podded up with someone I did not know too well, but suspected was faster than me.  He asked me how fast I was in the pool.  He said he was about the same … but that’s another story.  That’s the pool.

We swam together for about 25 minutes.  He was backstroking to keep pace with me.  Eventually he started to pull ahead, splitting the kayak coverage.  The kayaker was staying in-between us, with each minute getting further away and I was swimming more alone.

I caught up to him at the bridge.  I crossed under about 100 yards south of mid span, so I was in good shape.  The kayaker instructed me to swim direct east.  I felt good that I made it past mid span and was perfectly OK abandoning my desire to keep swimming south.

From that point on I had the kayaker all to my self, Bill James, a very experienced pilot for our swims.  He told the other swimmer to go on ahead and catch up with another kayak.  Later I learned that he did this with no problem.

After about 10 minutes of swimming east Bill James instructed me to start heading into the shore.  Not directly at 90 degrees, but at about 30 degrees.  I still wanted to get across as soon as possible, but trusted his guidance.

It turned out to be perfect as you can see from my map: 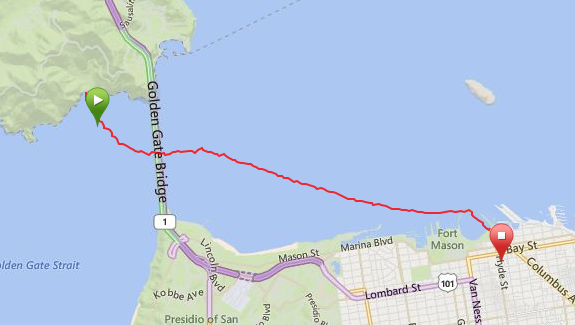 Unfortunately I do not have a GPS trail of my last attempt, but what I think happened then is a failure to cross under the bridge before mid span.  Then I must have got caught in the northern current, which kept me out too far and for too long.

Now, what if I did the swim my way?  Here’s the deal … I’m a slow swimmer, yet I completed this swim mid pack instead of towards the end, like I usually do.  I finished before swimmers that I know are faster than me.  The reason?  After interviewing a few of them I learned that they went too far south where the current was not as strong and even reaching where there is a back eddy near Crissy Field.  If I did the swim my way … that too would have been my fate.  Instead, I had the perfect line.  I attribute this to my highly skilled pilot, Bill James.