We had just hiked about eight or so miles, nineteen hundred feet up a ridge and down over the other side where the waterfall was. The waterfall created a natural pool where it carved into the granite over the decades. The water in the pool was a fifty-seven degrees that just bit into the skin when we jumped in. I at first tried to inch my way in but did not get very far as I watched the others just dive in. I could tell by the way they would immediately turn around and climb out that they were reacting to the cold much the way I was, but they were at least able to get it all over with in one plunge. I climbed back out and took my place on the rock to dive in. It was about a twenty-five foot swim to the other side. I’m used to swimming much greater distances, but this time the fifty foot round trip was enough. I climbed out as fast as I could, my head chilling like it does when I eat ice cream too fast, and I joined the others basking in the sun on the rocks. Shortly after, I jumped in again. The second time was not as bad and I was able to swim under the waterfall and down to the bottom of the pool. That was it. I had enough.

We remained for an hour enjoying the solitude after our dip. However we were on our way back now. The twenty ounces of water that I had filled my water bottle with from the creek was long gone. In fact it just barely made it to the top of the ridge, a seven hundred foot climb in a mile and a quarter. It was hot, about a hundred degrees according to the temperature gauge that was built into my watch. I drank the last of the water when I reached the top. “It’s OK,” I thought. “It’s all down hill from here,”

We were way above the tree line so had no protection from the sun. I really did not want to when asked if I wanted to take a half mile detour to look at some geological formations. I was thinking about the two gallon jug of water four miles away at the cabin and the cool creek running past it. However, I knew I would survive the route modifications and since I was already so close so I agreed. After the quarter mile journey I was shown where the serpentine rock had “squirted” through the granite cracks making interesting shapes. Then we headed back.

Our host was very familiar with the territory so I felt comfortable following him back. We took a little shortcut through a camping area as the heat continued to beat down on us. I noticed my mouth was starting to dry up as I would speak so asked for a little water from the others. They all were low so I did not take much. Just a little was not going to make much of a difference and I knew there was plenty in my future.

I notice the trail getting a little thinner and over grown with the tall dry grass. I was a little concerned. “Oh don’t worry,” our host said, “This trail is not maintained as well as the others.” I sensed a little hesitation in his voice but continued to trust. Suddenly he stopped. “Look,” he said and put his hand back to stop me. There was a tiny owl staring at us in front of some deep holes in the ground. “It’s a burrowing owl.” The owl was about seven inches tall. It sat there staring at us as owl as it could be with its round face. It was quite and experience as one of the last things I would expect to see is an owl. I thought they only came out at night. But, there it was staring at me. A magnificent piece of nature it was.

The owl startled a little as the other two approached and almost flew away, but then relaxed a little continued to maintain its ground. “Shhh,” our host said as we stopped them behind us. “Do you see the owl?” “I want to take a picture of it if I can.” He pulled out the camera as the owl maintained a watchful eye, and he lifted the camera to his. The owl stayed long enough to pose for the picture and flew away as the camera shutter clicked to signal that the image was captured. 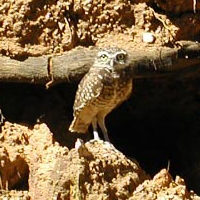 We continued down the trail. Within a hundred yards from the owl’s home, the trail ended at the edge of a cliff overlooking the ocean two thousand feet below. The view was incredible; however I suspected we had taken a path that would not lead us back to the cabin. I thought of the distance that we covered in the wrong direction. I thought of the heat and my increasing dehydration. The half mile in the wrong direction was down hill. All the logic in the world would leave me to believe that it would be a half mile up hill to get back on track. “We are not in Kansas anymore,” he said confirming what I had suspected. I could have easily become upset at this point. In addition to the thirst my feet were starting to throb and I was becoming tire and bored with hiking. I quickly set my discomfort aside and said with sincerity, “If we did take the wrong trial it was worth it to see the owl,” as I remembered the owl’s big eyes that had stared at me not more than a few minutes before. I knew the unplanned detour was to show us a little more than the geological formation we viewed before. How could our host have asked, “Do you want to take a detour to see an owl,” when he had no idea where one would be? No this was planned by nature’s great host tricking us into a side journey we would not have otherwise taken to share a bit of her self.

We turned around and headed back up to where the trails joined to head back down the correct path to the cabin. We still had a little over an hour’s journey. While my discomfort level was very high I knew I was far from being in any real danger. I remained in good spirits as we finished the day’s hike.